Wet-rot fungi which attack the stem base. Plant tissue becomes pulpy. Plant tops can be wilted, despite being well watered. (As in the xmas cactus photo)

Pythium debaryanum is known to attack seedlings and cuttings, but the largest plants can also be affected. Typically, it is an orange-brown wet rot that rises quickly to the upper rootlets, causing liquefaction of seedlings. The disease can be introduced on seeds.

On mature plants, the roots show orange when cut. Plant bodies appear orange-brown near the base.

Phytophthora cactorum or Collar-rot (or "cactus Blight") also starts from the base, a darkening, followed by a softening of the base of the plant, which quickly turns mushy brown. This can be confused with Erwinia, but Erwinia is bad-smelling and with Erwinia the top of the plant is often yellowish.

Back to previous page 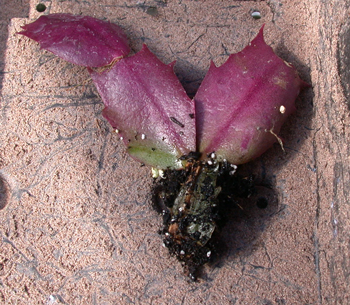 Drench the soil with a fungicide containing etridiazole, thiophanate methyl or metalaxyl.


Back to previous page